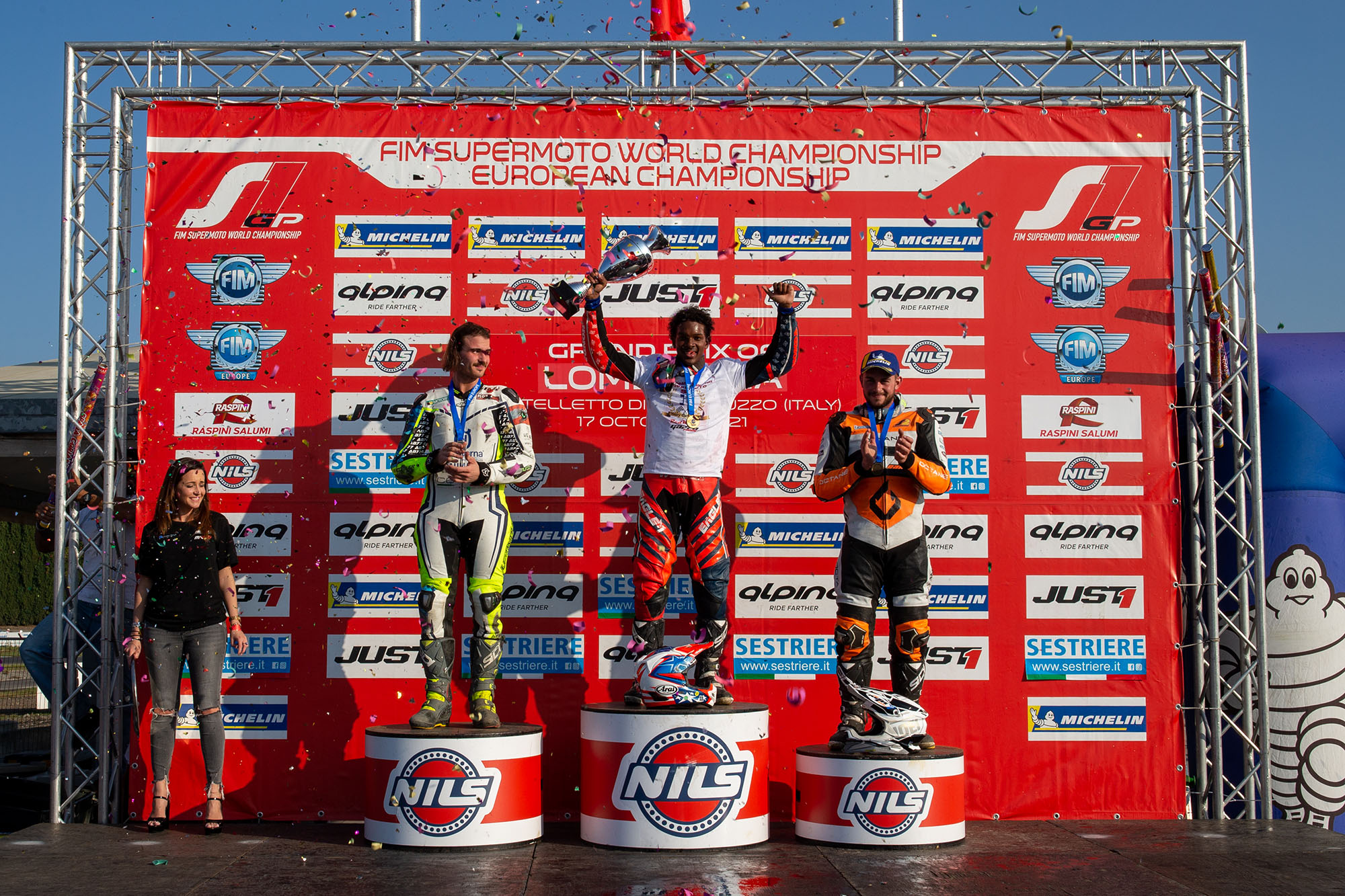 Castelletto di Branduzzo (Italy) 16 October 2021 – After qualifying day yesterday, it was time for the final races of the 2021 Supermoto European Championship and European Cup season on the Motodromo of Castelletto di Branduzzo. The circuit was prepared to its best on Saturday evening and was ready for the championship fights. With the almost perfect weather conditions, this Sunday became a day full of tension and emotions, but with some great Supermoto racing. In the S2 class Gazza Racing rider Youry Catherine took the overall victory in Castelletto and he won the 2021 Supermoto European championship. In the S4 class the victory went to Alessandro Morosi, but the 2021 European Cup victory went the FRT2 Racing rider Marco Malone.

At 12:20 hours the first race for the S2 class in the Supermoto European Championship took place in perfect weather conditions. At the start it was Gazza Racing rider Youry Catherine who was fastest into the first corner of the track with right behind him KTM MTR rider Romain Kaivers and championship leader Andy Buschberger. In fourth it was L30 TM Factory rider Luca Bozza, followed by Mats Fredshoe. The teammate of Bozza, Steve Bonnal had a bad start and was in last place. In front it was still Catherine who was in the lead, but Buschberger had passed Kaivers and was on his way towards the young Frenchman from Gazza Racing, Buschberger pushed hard and in lap four he overtook Catherine in one of the slower corners and the back of the track and took over first position. Kaivers was still in first but the Belgian rider couldn’t keep up the speed of the others and had to settle for third place in the race. In the meantime Steve Bonnal was back in fourth place after passing Fredshoe. Luca Bozza had an unfortunate start of the race after crashing in the second lap but the Italian TM rider was soon back behind his teammate Bonnal. In front the battle continued between Buschberger and Catherine. Lap after lap the two championship leaders were battling each other for every meter of asphalt until the last lap of the race. In the sky section Catherine placed his final attack and passed Buschberger. The Austrian rider tried to pass the Gazza rider back in the next corner but lost control and crashed. Buschberger quickly restarted his race and was still in second place but the victory was out of sight. Youry Catherine finished in first, followed by Buscherberger and the top three was completed by Romain Kaivers.

In the afternoon and in very good weather conditions the last race for the S2 class started in Castelletto. At the start Gazza Racing rider Youry Catherine pushed his Honda in first position into the lefthand corner of the circuit. Behind him it was Husqvarna rider Andy Buscherberger who was followed by KTM MTR rider Romain Kaivers. Fourth place was for L30 TM Factory rider Steve Bonnal in front of his teammate Luca Bozza. Straight from the start Catherine put the speed high and but Buschberger and Kaivers followed the fast Frenchman giving him no chance to get away. Bonnal and Bozza both were not far behind and together they started their chase towards the top three. Buschberger who was in second position had to take some risks to get passed Catherine, his main rival in the championship. In the sky section it went all wrong for Buschberger and he crashed. He quickly picked up his bike but couldn’t prevent that he had to restart from fifth place which wasn’t enough for the European title. In front Catherine started pushing harder but Kaivers was all over the back of the Honda trying to overtake him in every section of the circuit. In the meantime Buschberger lost his rhythm and could not come any closer to Bonnal and Bozza giving him no other choice than to settle for fifth. In the last lap, Kaivers prepared his last attack in the off-road section but Catherine didn’t make any mistakes and kept the door closed making him the winner in Lombardia and more important he took the 2021 Supermoto European Championship title in front of Buschberger and Kaivers.

The first race of the Sunday was for the S4 class. At the start it was L30 TM Factory rider Kevin Vandi who took the hole shot in the first tight left corner of the circuit followed by Spanish rider Alex Ruiz-Gimenez and his teammate Alessandro Sanchioni. Fourth position was for FRT2 Racing rider Marco Malone who is currently leading the European Cup. The two local riders Alessandro Morosi and Filippo Farioli got stuck at inside of the first corner and were in fifth and sixth place after the first lap. In the lead Vandi was trying to get away but the other riders were also out for first place and this was the start of an intense battle for the lead with a group of six riders only a few meters away from each other. After a few laps Morosi and Farioili had passed Malone making him sixth in the race behind his main rivals. In the fourth lap Ruiz-Gimenez tried to take over the lead in one of the long fast corners but the Spanish rider pushed to hard and crashed giving the other the opportunity to pass him. Ruiz-Gimenez could restart his race from sixth place but the top five was already out of reach. With one competitor less, the problems for Vandi were not over as Farioli, who passed Morosi, was in full attack mode. A few laps later the young Italian rider took over first position from Vandi and started to put down some serious lap times giving the others no chance to attack him. Morosi had also passed Vandi and both local riders soon got a gap towards Vandi, Sanchioni and Malone who was still in fifth. Farioili finished in first place, followed by Morosi and last the spot in the top three was for Kevin Vandi who kept his title rivals behind him. Marco Malone is still in the load in the Cup standing with an advantage of seven points which makes the second race the winning one.

The last race of this weekend and season for the S4 class started at 14:40 hours in sunny conditions. At the start it was L30 TM Factory rider Kevin Vandi who took the holeshot in front of Ruiz Racing rider Alex Ruiz-Gimenez and KTM MTR rider Filippo Farioli. Fourth place was for L30 TM Factory rider Alessandro Sanchioni with right behind him local rider Alessandro Morosi. European Cup leader Marco Malone started the race in sixth place. In front Vandi tried to get away but as in race one, all riders were very close together which made impossible to get away. In lap three, Ruiz-Gimenez and Farioli took over the lead from Vandi leaving him in third position. Things got worse for Vandi as also Morosi passed him in one the fast corners and also his teammate Sanchioni was not far out. The battle for first place was on between Ruiz-Gimenez and the winner of the first race Farioli, who was out for his second win of the day. But both rider didn’t count of Morosi who was on fire in race two. After Farioili passed Gimenez for the lead, the Spanish rider passed him back the next lap, but one lap later both leaders were passed by Morosi. After this pass Morosi quickly got away for the rest and took the victory in race two and the overall victory in Castelletto. Gimenez finished in second in front of Kevin Vandi who passed Farioli after an mistake from the young Italian. Cup leader Malone had a difficult race and finished in sixt, which was just enough the take 2021 European Cup title.

In the photo: Podium S2 and Podium S4