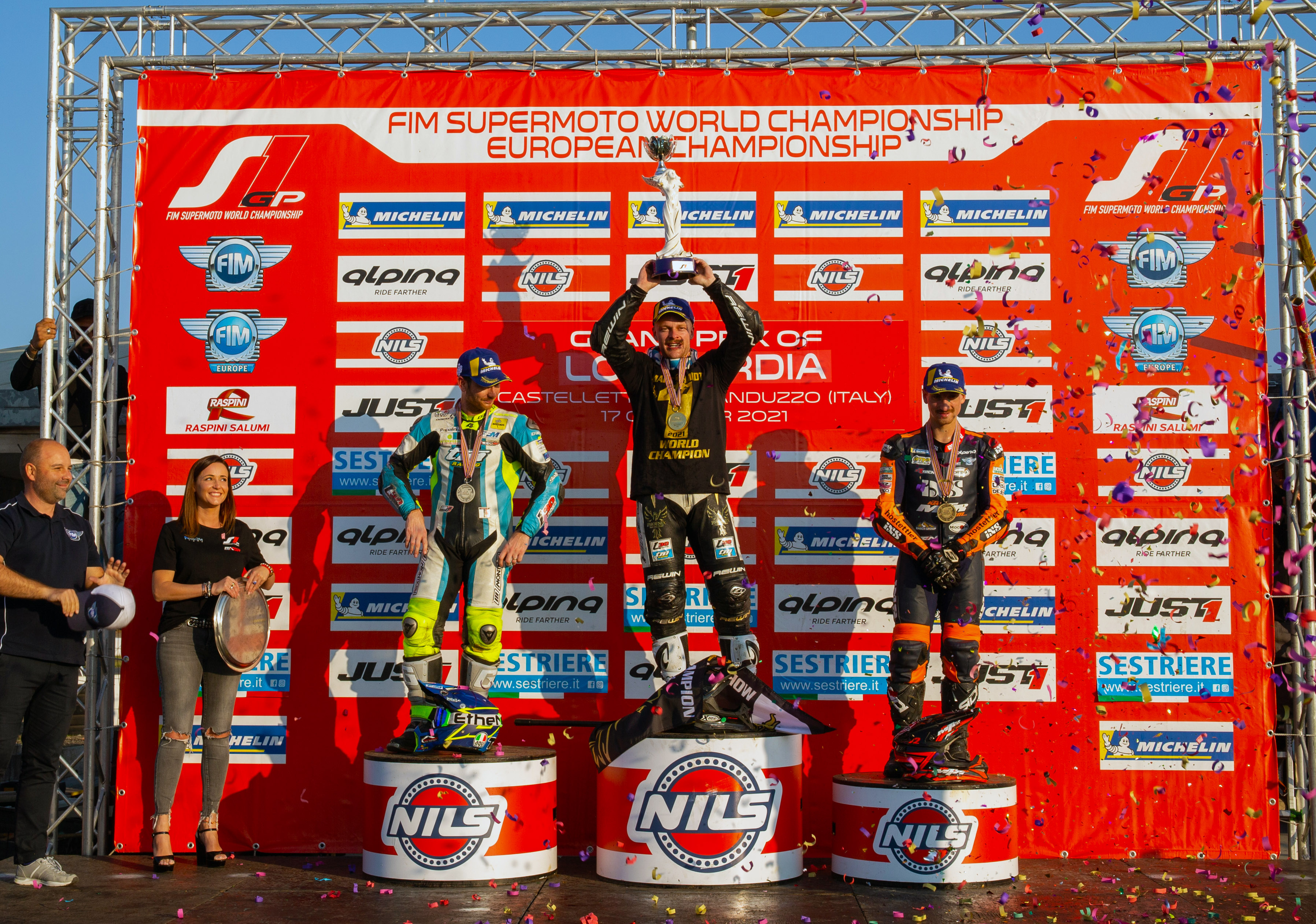 Castelletto di Branduzzo (Italy), 17 October 2021- After the first race on Saturday the battle for the 2021 Supermoto World Chamopinship title continued today at the Motodromo of Castelletto di Branduzzo, located in the region of Pavia. With the last preparations done to the challenging track, all riders, teams and the spectators on the grandstands were ready for the grand final of the season. After some epic races full of action and tension, the overall victory of the GP of Lombardia went to KTM MTR rider Lukas Hollbacher, but the 2021 Supermoto World Championship title went the Phoenix Racing rider Marc-Reiner Schmidt.

At 13:30 hours the lights dropped for the FastRace of the S1GP class here at the Motodromo of Castelletto di Branduzzo. KTM MTR rider Lukas Hollbacher took the hole shot into the first corner of the circuit, followed by L30 TM Factory rider Thomas Chareyre and Phoenix Racing rider Marc-Reiner Schmidt. Fourth position was for SMX Racing rider Mickael Amodeo, who was just in front of another Phoenix Racing rider Elia Sammartin. Tensions were high and already in the first lap the two main rivals for the title clashed. Chareyre was at end of the first lap in fifth place and Schmidt was even further behind in eight position behind Milan Sitniansky and Giovanni Bussei. In front Hollbacher was still in the lead and the Austrian baker had already a gap towards the rest of the field. Amodeo was now in second position but Sammartin was all over the Frenchman. Chareyre in the meantime had passed Bartolini and was back in fourth position closing in rapidly on Amodeo en Sammartin. Also Schmidt was on fire and the German rider was back in fifth place in only one lap and was now on his way to Chareyre. In the the next lap Amodeo made an mistake as well and the SMX rider was thrown back to fifth. Hollbacher in the meantime was pulling away from all the others and started to control the race from first position. Behind him the battle for the championship went on, as Schmidt passed Chareyre for third place only a few meters away from Sammartin who was second. Chareyre however didn’t give up and prepared an attack in the next lap to overtake Sammartin and Schmidt in one time. With three riders breaking hard, it went wrong for Schmidt again as the German rider crashed again, which made him fall back to seventh position in the race and more important for the championship giving Chareyre second position in front of Sammartin. Hollbacher now had a lead of more than ten seconds, maid no mistakes and finished in first position after seven laps in this fast race. Marc-Reiner Schmidt was soon back in third place after his crash but Thomas Chareyre was too far out for the championship leader.  Chareyre finished in second position and the top three in the FastRace was completed by Marc-Reiner Schmidt. With only the Superfinal to come, the battle for the title gets more intenser by the minute.

Last race of the Sunday and the 2021 was the Superfinal where tactics have shown to be very important this season. At the start it was again KTM MTR rider Lukas Hollbacher who took the hole shot onto the next fast straight of the track in Castelletto followed by L30 TM Factory rider Thomas Chareyre and Phoenix Racing riders Marc-Reiner Schmidt and Milan Sitniansky. In fifth it was SMX Racing rider Mickael Amodeo, followed by SBD UnionBike rider Giovanni Bussei. The plans from Hollbacher were very clear and that was winning today in Castelletto. From the start the speed was very high and soon the three title competitors had a gap towards the rest of the field but it wasn’t an easy run. Lap after lap they challenged each other for every meter of asphalt and sand but especially for Schmidt the mission was clear, don’t make any mistakes and win the World title. Schmidt stayed behind Chayere and Hollbacher in third position and decided to take the jokerlane as first of the leading group. Schmidt didn’t lose an spot and he came on track in front of Sitniansky who was still in fourth having his own race. Chareyre and Hollbacher kept fighting but the Austrian KTM rider didn’t give Chareyre any chance of coming closer so the Frenchman decided to take the jokerlane and maybe undercut Hollbacher in this way. This was the sign for Hollbacher to open throttle as wide as he could to take some extra time on Chareyre. In the next lap, Hollbacher took the jokerlane and it was clear the strategy worked as he stayed in front of Chareyre who also gave everything the TM had. From that point on Hollbacher controlled the race until the finishline taking the victory in the Superfinal and the overall victory in Castelletto di Branduzzo. Thomas Chareyre finished in second position and Marc-Reiner Schmidt completed the top three. Milan Sitniansky finished in fourth in front of Elia Sammartin who had a good race coming from seventh at the start. With his third place Marc-Reiner Schmidt took the FIM Supermoto World Championship title in 2021.

The FIM Supermoto World Championship will be broadcasted delayed, by clicking HERE you will obtain the full tv list