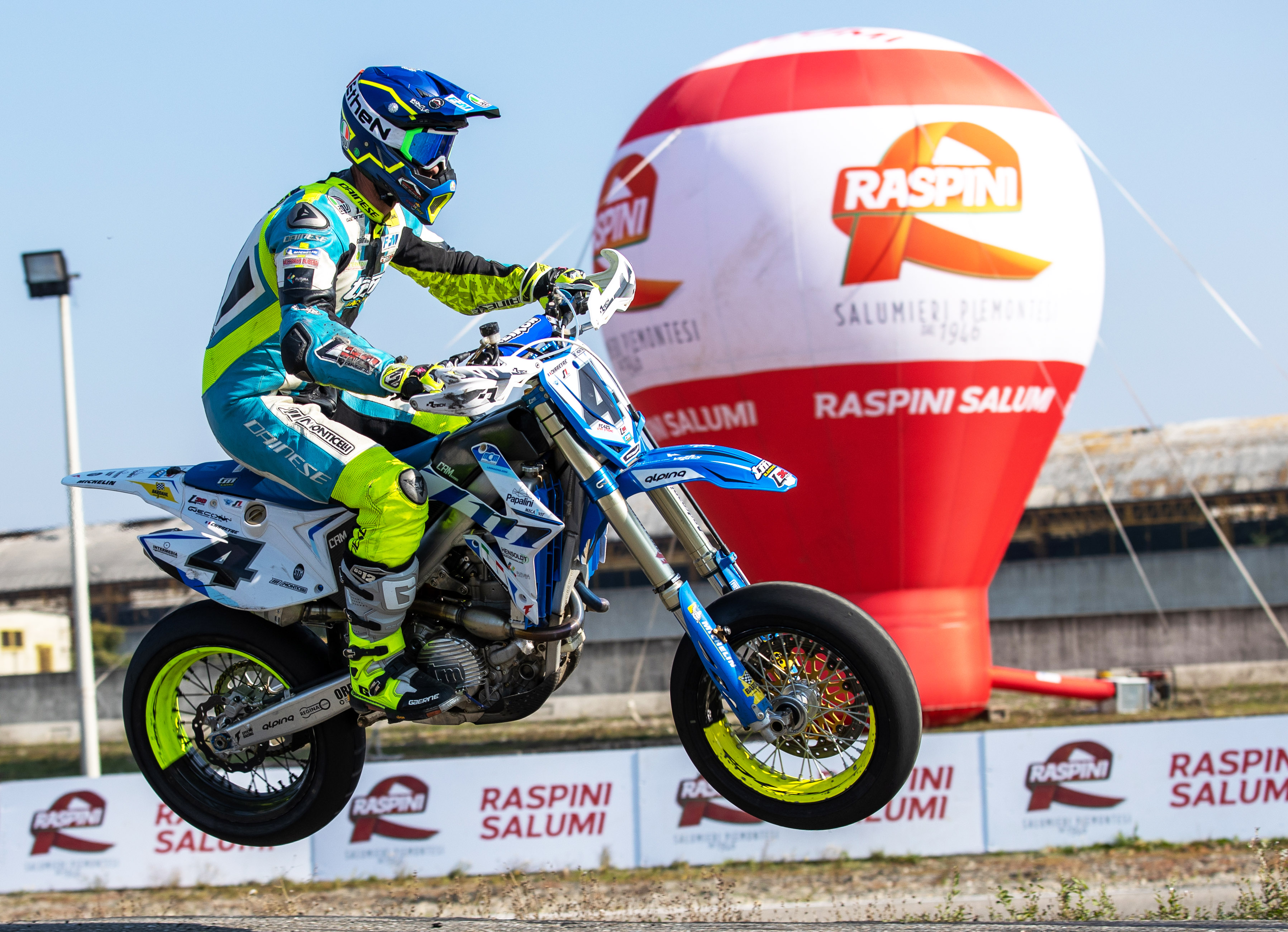 Castelletto di Branduzzo (Italy) – 16 October 2021 – This weekend the last and final round of the 2021 Supermoto World Championship started on Saturday with the practices, SuperPole and RaceOne for the S1GP class on the Motodromo Castelletto di Branduzzo located in the region of Pavia in Italy. The racetrack is one of the most spectacular tracks on the calendar with its fast corners and straights, a challenging sky section and a fast off-road section. With the championship still wide open, every point in Castelletto is important for the riders and teams. The Superpole was won by Phoenix Racing rider Marc-Reiner Schmidt and the victory in RaceOne went to L30 TM Factory rider Thomas Chareyre. After the victory of Chareyre the disadvantage of him towards Schmidt is only 13 points.  The battle for the Supermoto World championship will be continued tomorrow in Castelletto di Branduzzo.

In sunny and good weather conditions the time practice of the S1GP class started 14:05 hours on this Saturday. In the first free practices here at the Motodrome in Castelletto di Branduzzo  it was the Phoenix Racing rider Marc-Reiner Schmidt, who showed the competition that he was ready for the battle in this last round of the Supermoto World Championship. When the practice session started all riders went out to try to reach the top six who are going to the SuperPole. After a warm up lap, Schmidt set a time which was more one second faster than all the others and the German championship leader went into the pitlane to see of the rest could match his very fast time. L30 TM Factory rider Thomas Chareyre, KTM MTR rider Lukas Hollbacher, SMX Racing rider Mickael Amodeo and the two teammate of Schmidt, Elia Sammartin and Milan Sitniansky stayed out on the track and lap by lap they came closer to the time set by Schmidt but it was nowhere near enough to take that time. All the riders didn’t give and after some last changes to the bikes, it was time for the final attack. Sammartin and Hollbacher were the first riders who tried but both had to settle for third and fourth time. One man however had other plans and with an ultimate lap, Chareyre beat the time of Schmidt with 00:036 seconds in his very last lap.

The Superpole started directly after the time practice. First rider on track was Mickael Amodeo who had to set the time to beat as the Frenchman was sixth in the time practice. Next rider was Phoenix Racing rider Milan Sitniansky but the Czech rider couldn’t beat the time of Amodeo. Than it was time for Lukas Hollbacher to set a time, and the Austrian baker did what he had to do and took first place from Amodeo. Elia Sammartin was the next rider to set a lap time. Despite his very good lap, Sammartin wasn’t faster than Hollbacher and was now in second position in the Superpole. Than it was time for Marc-Reiner Schmidt. The German gave all he could and with a very fast lap, Schmidt took over first place from Hollbacher with more a lead of the more than one second. Last rider on the track was Thomas Chareyre and the eight times World champion knew that he couldn’t any mistakes if he wanted to take the point of the Superpole. Chareyre was fast but not fast enough to beat Schmidt, making the Phoenix Racing rider the rider of the Superpole and more important an extra point in the championship.

RaceOne of the S1GP class started 16:30 hours in still very good weather conditions. At the start it was KTM MTR Lukas Hollbacher who had a rocket start and took the hole shot into the first tight corner of the Motodromo. Right behind him it L30 TM Factory rider Thomas Chareyre and Phoenix Racing rider Marc-Reiner Schmidt so straight from the start the three title contenders close to each other. Fourth position was for Phoenix Racing rider Milan Sitniansky followed by SMX Racing rider Mickael Amodeo and the teammate of Sitniansky, Elia Sammartin. For Sammartin the race was soon over due to technical problems after a crash. The Italian rider tried to finish the race, at the end he had to retire his TM. In front Chareyre wasted no time and took over the first position in the race from Hollbacher. The problems for the Austrian KTM rider weren’t over as Schmidt also passed him. The leader in the championship was out for more, and in lap three he out braked Chareyre on of the long straights taking the lead in RaceOne. A few corners later Schmidt made an mistake and Chareyre and Hollbacher passed the German rider making third again in the race. In fourth place it was still Sitniansky with now behind hime SBD UnionBike rider Giovanni Bussei who had a good race coming from seventh place. Amodeo also made and the Frenchman had to restart from ninth. He quickly found his pace back and some laps later he was in sixth place and had to fight with Bussei and Fabrizio Bartolini. In the lead it was still Chareyre who had to give everything to stay in front of Hollbacher and Schmidt, but the multiple champion didn’t make any mistakes and slowly he created a safe distance towards his two opponents. After ten fast laps, Thomas Chareyre crossed the finish line in first place, followed by Lukas Hollbacher. The top three of RaceOne was completed by Marc-Reiner Schmidt. With the victory of Chareyre the tension in the Supermoto World championship is getting higher and higher. Chareyre is only 13 points behind Schmidt. Hollbacher in his turn is 30 points behind the number two and with 55 points in the championship everything is still possible. To be continued tomorrow.