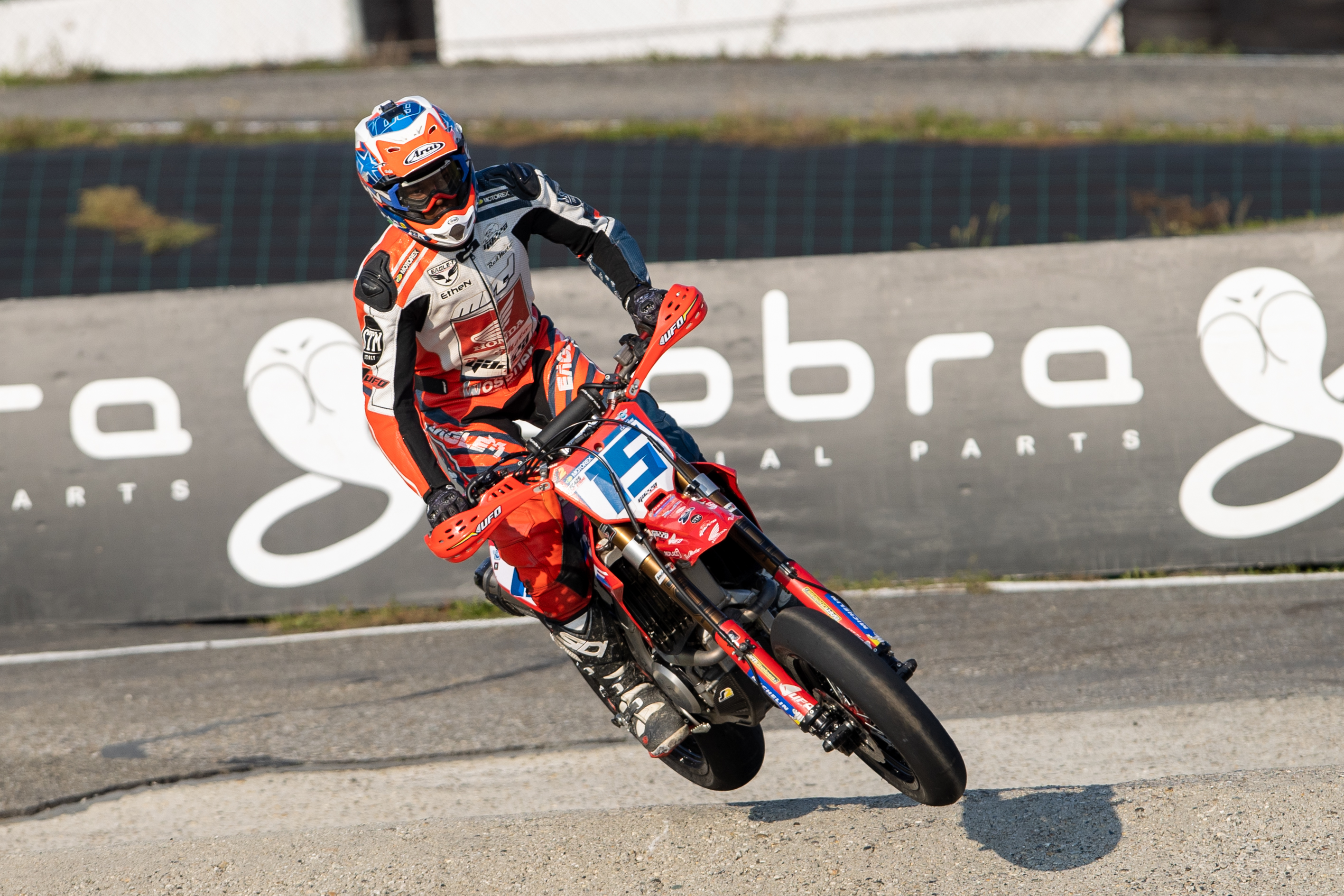 Castelletto di Branduzzo (Italy) – 16 October 2021 – For the riders in the Supermoto European championship and European Cup, it will also be the final round of the 2021 season this weekend at the Motordromo of Castelletto di Branduzzo. With the titles in the S2 and S4 class still open and the track prepared perfectly by the organizers, the riders were ready for the battles. Today the free practices and timed practices were held in very good weather conditions. In the S2 class it was Gazza Racing rider Youry Catherine who took the pole position for tomorrow’s race. In the S4 class the fastest time was set by L30 TM Factory rider Kevin Vendi.

In the free practices today a the Motodromo of Castelletto it was already Gazza Racing rider Youry Catherine who was fastest than his main rivals for the Supermoto European championship title, but the young Frenchman also knew that the time practice was the only practice that mattered today. Catherine is six points behind in the championship so a good starting position would be important. After the timed session started all riders entered the track immediately to have a many stints as possible. From the start it was Catherine who was setting the fastest times, but KTM MTR rider Romain Kaivers, championship leader Andy Buschberger and the two L30 TM Factory riders Luca Bozza and Steve Bonnal were not that far out. After the final setups done to the bikes, every rider went out again. First position changed many times as the riders were getting faster and faster, but at the end of the session it was Catherine who took the pole-position for the races tomorrow in from of Kaivers and Bozza, who completed the top three. The leader in the S2 class Buschberger has to start from fourth position.

The first time practice of the Saturday here in Castelletto di Branduzzo was for the S4 class of the European Cup. When the clock started for the practice, all riders were eager to get on the track, to see who was able to set the fastest time. Most of the riders know the racetrack very well and soon the practice the lap times dropped with almost every lap an new fastest rider on top of the timing list. Honda rider Alessandro Morosi and KTM MTR rider Filipp Faroili were new to the European Cup but the two showed impressive times and were on top of the list for many laps forcing the other to go even faster. At the end of the session six riders were within 00:515 seconds from the leader which was at the end L30 TM Factory rider Kevin Vandi who set a time of 1:13:298. His teammate Alessandro Sanchioni finished in second and the third fastest time was for Morosi. Leader in the championship of the S4 class, was fifth fastest and knows he has to make up places tomorrow in the races.

In the photo: S2 Youry Catherine