THE COUNTDOWN FOR THE GRAND FINAL OF THE 2021 HAS STARTED 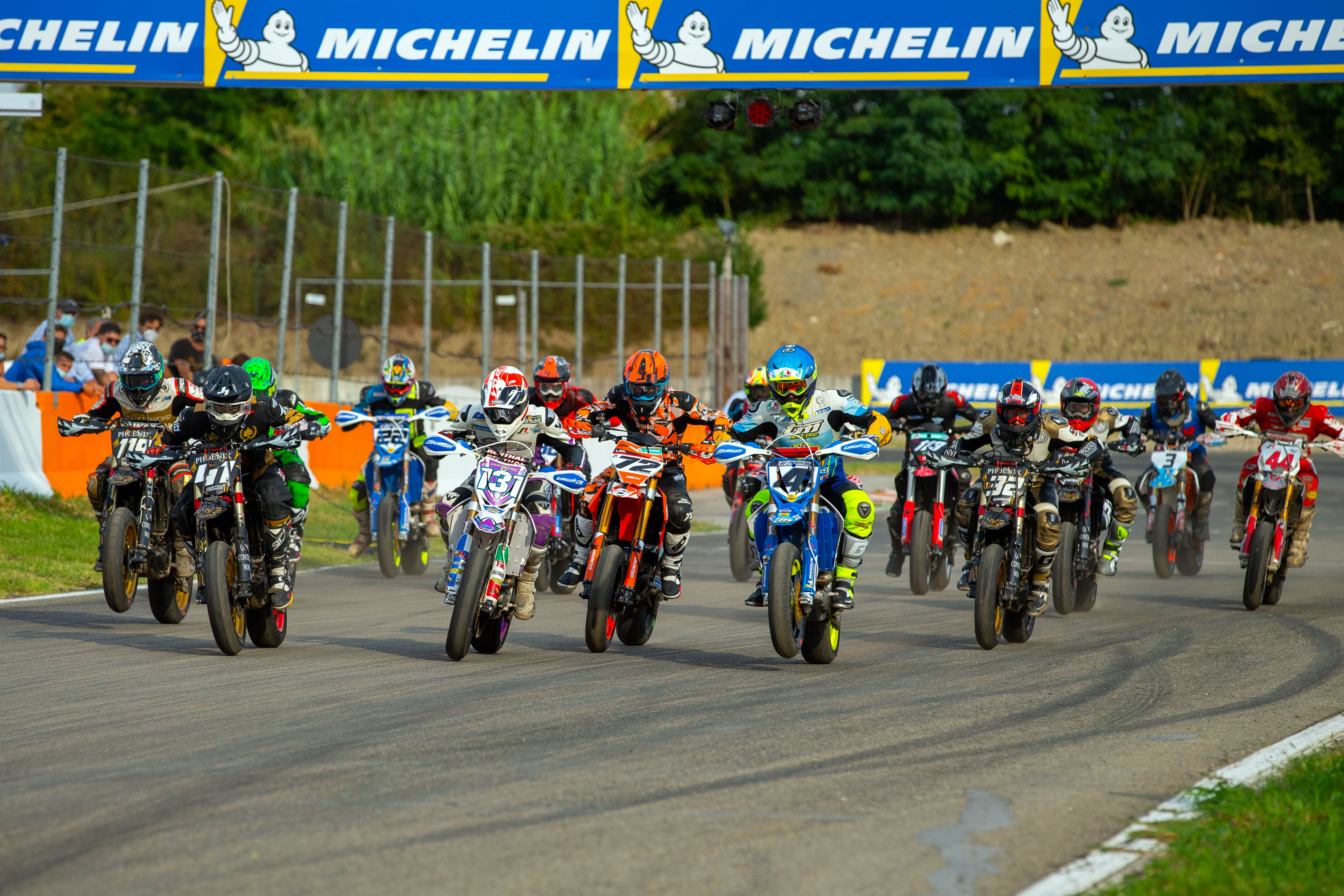 Castelletto di Branduzzo (Italy) – 14 October 2021 – This weekend the grand final of the 2021 Supermoto season will be held at the Castelletto Circuit, Pavia. The racetrack has hosted many great events in the past and is one of the most exiting tracks in Europe with its fast corners and straights, an challenging sky section and fast off-road section. The organizers have done everything to prepare the circuit to its best and with all the championships titles still open, the tension and expectations are getting higher and higher amongst all contenders in the S1GP, S2 and S4 class. With Castelletto di Branduzzo being the final race of the season for most teams, it is for them also the ideal opportunity to reveal their plans for the World and European championships in 2022. Together with the good weather predications, it will be without any doubt an fantastic weekend for the Supermoto sport and its spectators.

After four rounds in the S1GP class of the FIM Supermoto World championship, Phoenix Racing rider Marc-Reiner Schmidt still has a lead of 17 points, on L30 TM Factory rider Thomas Chareyre and 44 points on MTR KTM rider Lukas Hollbacher, who is currently third in the championship. Höllbacher in his turn is only 27 points behind Chareyre. Marc-Reiner Schmidt has the best chances on paper but with still 81 points available in the championship everything is still possible and no mistakes can be made. Schmidt will undoubtedly give everything he has got to take his first World Supemoto title, but it will not be without a fight with Chareyre and Höllbacher. Fourth is the championship is the teammate of Schmidt at Phoenix Racing, Milan Sitniansky, who is 95 points behind the leader and only 8 points ahead of his teammate Elia Sammartin. Nine points behind Sammartin is L30 TM Factory rider Diego Monticelli. Monticelli is sixth in the standing of the S1GP class but the former European champion has still sight on the fourth place in the championship of the S1GP class. With 138 points DDC Racing rider Danielle di Cicco is currently seventh and the Italian rider will do it upmost best to defend his position against L30 TM Factory rider Patrick Pals who is only five points behind. The battle for ninth and tenth place in the S1GP class is also a very close one as SMX Racing riders Mickael Amodeo and Husqvarna rider Alberto Moseriti have equal point after round four. Michael Vertemati from Vertemati Racing is also present again in Castelletto and will try to enter the top ten. After missing a few rounds SBD Union Bike rider Giovanni Bussei is also back again in the Supermoto Wolrd Championship, the experienced rder is currently in twelfth position. Fabrizio Bartolini will also be present in Italy, like in the first round in Ortona. Next to these riders, there will be also two strong Swiss riders at the start in Castelletto. TM Racing Andorra rider Raoul Tschupp and Yamaha rider Julien Haenggeli wil try to go for the top ten. The last rider on the entry list is the first ever Malaysian rider to start in the World championship, Muhamad Mohd-Saleh. Mohd-Saleh will start on an Husqvarna.

The S2 class of the Supermoto European Championship will also have its final this weekend at the Castelletto Circuit in Castelletto di Branduzzo. Leader in the championship is still Austrian Husqvarna rider Andy Buschberger, but the Austrian rider has only an advantage of six points on Gazza Racing riders Youry Catherine who is in second place in the championship. Five riders still have a chance on the 2021 title with in third place KTM MTR rider Romain Kaivers. Kaivers is 20 points behind the leader and after winning the round in Sestriere, the Belgium rider is out for more. Fourth and fifth in the standings are teammates Luca Bozza and Steve Bonnal both riding for the L30 TM Factory team of Ivan Lazzarini. Bodo Schmidt Motorsport rider Tim Szalai will also be back after missing the round in Sestriere. The teammate of Catherine at Gazza Racing, Andrea Stucchi will try to take seventh place as SMX Racing rider Romeo Fiorentino has been injured during the Supermoto of Nations. The entrylist is completed by SMOT Racing rider Mitja Krasniqi and 911 Racing rider Mario Schafler.

Also in the S4 European Cup the title for 2021 is still wide open as FRT2 Racing rider Marco Malone and L30 Racing rider Kevin Vandi are only eleven points apart. Third in the S4 class is Spanish rider Alex Ruiz-Jimenez with 75 points who has a lead of only one point on L30 Racing rider Alessandro Sanchioni. Gazza Racing will have two riders at the start in Castelletto with Giorgio Cravotto and Matteo Gabbianelli. Another Malaysian rider will make his debut in the S4 class. Khairulamirin Yahaya is back after his injury and will start for the Spanish Supermotoland team. The enty list is completed by Lituanian rider Justinas Kontrauskas, Dutch rider Jos Koelewijn and KTM MTR rider Filippo Farioli, for whom it is the first race in European Cup.