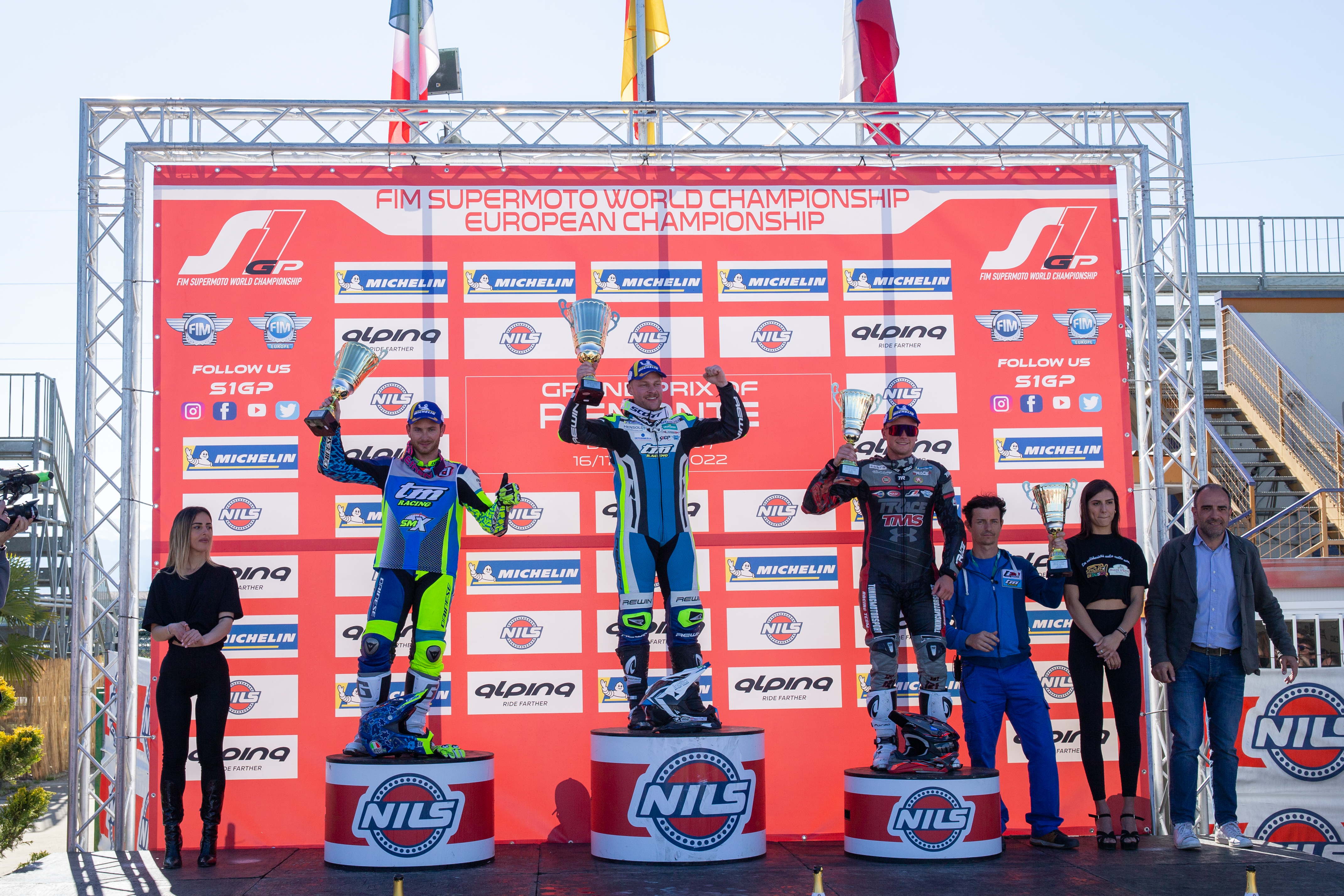 Busca (Italy) 17 April 2022 – On Eastern Sunday the 2022 FIM Supermoto World Championship continued for the S1GP class on the Circuito Internazionale di Busca in the town of Busca, located in the region of Piemonte. During the evening on Saturday the track was prepared to its best and was ready for another day of epic racing. In perfect weather conditions and the grandstands packed with spectators saw the Supermoto sport at its best. After two races full of action, tension and hard racing it was L30 Racing TM Factory rider and current World Champion Marc-Reiner Schmidt who took the overall victory in Busca and received the red plate from the FIM delegate. TC4R1 rider Axel Marie-Luce was the fastest Rookie rider in Italy this weekend.

At 13:30 hours the lights dropped for the FastRace of the S1GP class here at the Circuito Internazionale di Busca. SMX ASD rider Thomas Chareyre took the hole shot into the first lefthand corner followed by KTM MTR rider Lukas Hollbacher and L30 Racing TM Factory rider Marc-Reiner Schmidt. Fourth place was for Gazza Racing rider Markus Class in front of TMS Tuning rider Milan Sitniansky and SBD Union Bike rider Giovanni Bussei. With Chareyre in front, Schmidt didn’t want waste any time and passed Hollbacher in the second lap of this FastRace. After Schmidt took over second place it was time to set his sights on Chareyre who was not far in front. Behind the top three Class, made an mistake and had to restart the race from thirteenth position. This made Sitniansky fourth and Bussei fifth. Bussei however had to deal with L30 Racing TM Factory rider Elia Sammartin who was coming from seventh place at the start. Two laps later the Italian champion passed Bussei and became fifth in the race. Sitniansky had already created a gap and was in control of fourth place and soon it seemed that Sammartin had to settle for fifth. In front Schmidt had closed the gap towards Chareyre and in one of the outbreaking points on the track the current World champion took over the lead in the second race of the GP of Piemonte. Schmidt started pushing hard trying to get away but Chareyre stayed right behind him and a fight for many laps was born. Hollbacher was still in third but the Austrian rider couldn’t follow the two leaders. The problems for Hollbacher became even bigger as technical problems on his rear suspension made him fall back to twelfth place at the finishline. Due to the problems of Hollbacher, Sitniansky moved up the third position and Sammartin into fourth. The battle for fifth position was far from over and it was Gazza Racing Rookie rider Youri Catherine who got faster lap after lap. Catherine came from ninth but the French rider finished in fifth after some epic racing with Bussei, KTM MTR rider Andy Buschberger and TC4R1 rider Axel Marie-Luce. In the lead Marc-Reiner Schmidt kept Chareyre behind him and took his second victory of this weekend in front of Chareyre. Milan Sitniansky completed the top three. With his fifth place, Youri Catherine was the best Rookie rider in front of Andy Buschberger and Axel Marie-Luce.

Last race of the Sunday was the Superfinal where tactics have shown to be very important last season. At the start it was L30 Racing TM Factory rider Marc-Reiner Schmidt who took his first hole shot of this weekend in front of SMX ASD rider Thomas Chareyre and TMS Tuning rider Milan Sitniansky. Fourth position for the teammate of Schmidt at TM, Elia Sammartin. KTM MTR rider Lukas Hollbacher had to start from ninth position after his problems in the fast race. From the start the Austrian baker had a good rhythm and a few lap he was already in sixth place chasing TC4R1 rider Axel Marie-Luce and Sammartin. In front Schmidt and Chareyre had their own battle and both riders were determined to win this last race. After trying to pass Schmidt for many laps Chareyre decided to take the joker lane, which is mandatory in the Superfinal. In the next lap Schmidt also took the Joker lane and the gamble from Chareyre worked as Schmidt entered the track again behind the Frenchman. For a few laps Schmidt opened the attacked on Chareyre again and in one of the hardest braking points of the track, the German World champion outbraked Charyere and took over first place again. Behind the two leaders Sitniansky was still in third position, but the Czech rider had only a few seconds lead on Lukas Hollbacher who passed Sammartin and Marie-Luce in the previous laps. For Marie-Luce the problems were not over as Gazza Racing rider Markus Class found the speed in the Honda and with four laps to Class took over sixth place in the race. Marc-Reiner Schmidt was still in the lead but he had to work very hard and defend his position every corner against Chareyre. The battle continued until the finishline. With only 00:054 second between them, Marc-Reiner Schmidt took the victory in the Superfinal and also the overall victory in the GP of Piemonte. Second position was for Thomas Chareyre, followed by Milan Sitniansky who kept Lukas Hollbacher behind him. Axel Marie-Luce was the fastest Rookie with a seventh place in the last race. With this seventh place the TC4R1 rider also took the overall victory in the Rookie classification.

Weather conditions: Sunny with some clouds in the morning