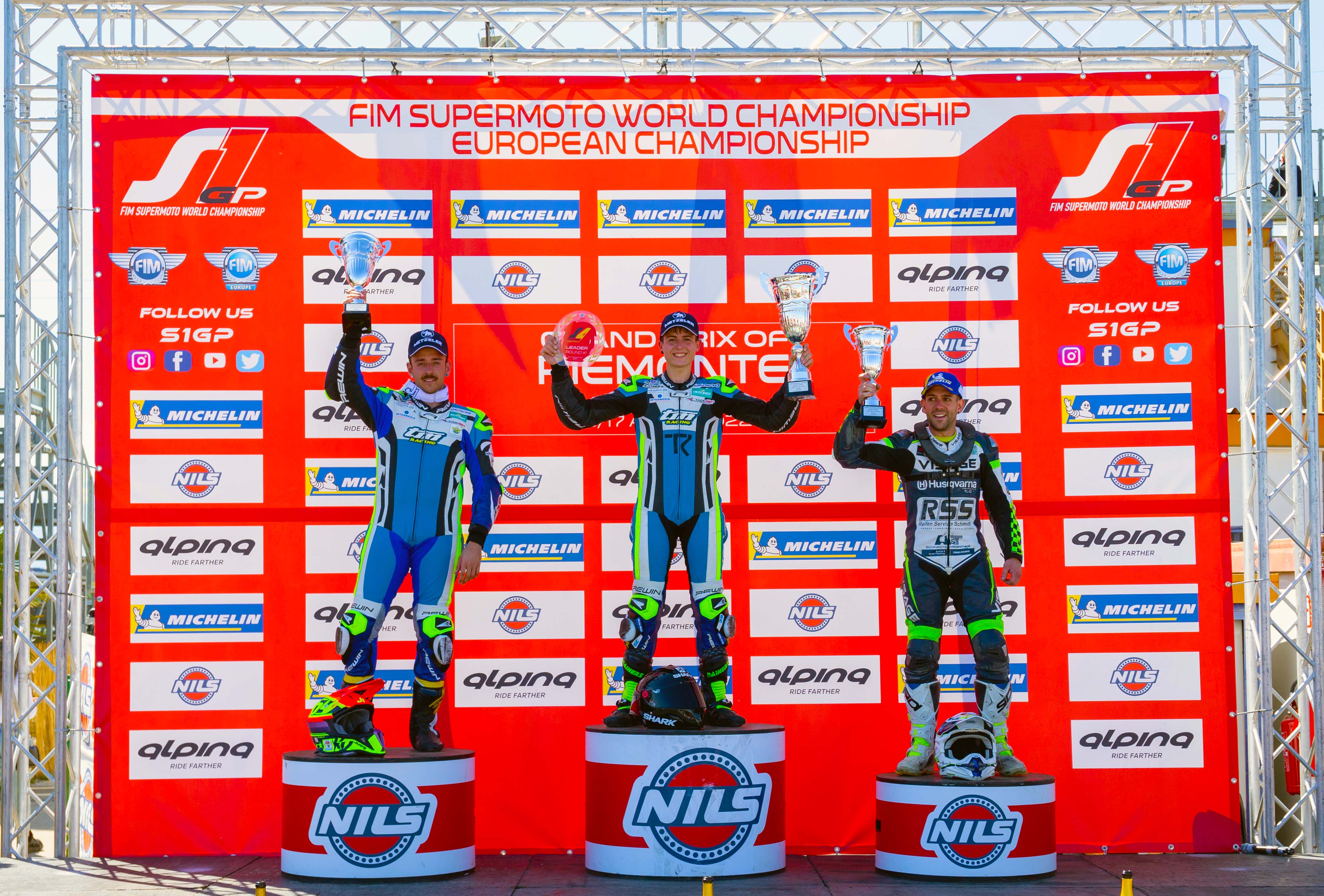 Busca (Italy), 17 April 2022 – For the S4 Supermoto European Championship is was the first race day of the 2022 season. After the practices yesterday the action continued on the racetrack of KartPlanet in Busca with the races in the fast asphalt class. The weather condition in Busca were more cloudy but for racing still perfect. The spectators on the grandstands enjoyed two spectacular races with very close racing and lots of action. With two race wins it L30 Racing TM Factory rider Alex Ruiz-Gimenez who the overall victory in the GP of Piemonte and is the red plate back home to Spain.

The first race of the Sunday was for the S4 class. At the start it was L30 Racing TM Factory rider Alex Ruiz-Gimenez who took the hole-shot into the first fast corner of the Circuito Internazionale di Busca. Second place was for the teammate of Ruiz, Kevin Vandi who was in his turn followed by FRT2 Racing rider Marco Malone. Fourth place was for Gazza Racing rider Giorgio Cravotto but a small mistake in the first lap made him fall back to last place in the race. In front the two teammates were fighting and already in lap two Vandi overtook Ruiz-Gimenez for the lead with Malone not far behind. Lap after lap the three were battling for every meter of asphalt. Ruiz-Gimenez was pushing hard and in lap five the young Spanish rider he took the lead back in the race, passing Vandi in one of the fast corners of the track. Malone was also pushing but couldn’t get passed the two TM riders. Once in the lead Alex Ruiz-Gimenez kept setting fast lap times and after a few laps the Spanish rider had a comfortable lead on Vandi and Malone. Ruiz-Gimenez controlled the race until the finish line, where he took the first victory of the season in the S4 class. Second position was for Kevin Vandi followed by Marco Malone. German rider Kevin Zahorak finished in fourth and the top five was completed by Alexis Delong.

The last race of this weekend for the S4 class started at 14:40 hours in sunny conditions. At the start it was L30 Racing TM Factory rider Alex Ruiz-Gimenez who took the hole shot in front of his teammate Kevin Vandi and FRT2 Racing rider Marco Malone. Fourth place was Gazza Racing rider Giorgio Cravotto who was followed by German Husqvarna rider Kevin Zahorak. For Marco Malone the race was over in third lap after technical problems on the long start straight. With Malone out of the race, Ruiz-Gimenez and Vandi quickly created a big gap towards the rest of the field. The two L30 Racing TM Factory riders were fighting for every centimetre of asphalt trying to overtake each other almost every corner. In lap six, Kevin Vandi passed Alex Ruiz-Gimenez and took over the lead in the race but the young Spanish rider didn’t give up and started an tactical races watching every move of Vandi in front of him. Cravotto and Zahorak were still in third and fourth but they were to far apart for any attacks. In front it was completely different as Ruiz-Gimenez started to push harder and harder and with three laps to go the Spanish rider passed Vandi and was again the leader in the race. After that move Vandi gave all he had but it wasn’t enough for the victory. The victory in race two and the overall victory went to Alex Ruiz-Gimenez. Third and last spot on the podium was Kevin Zahorak.

In the photo: Podium S4