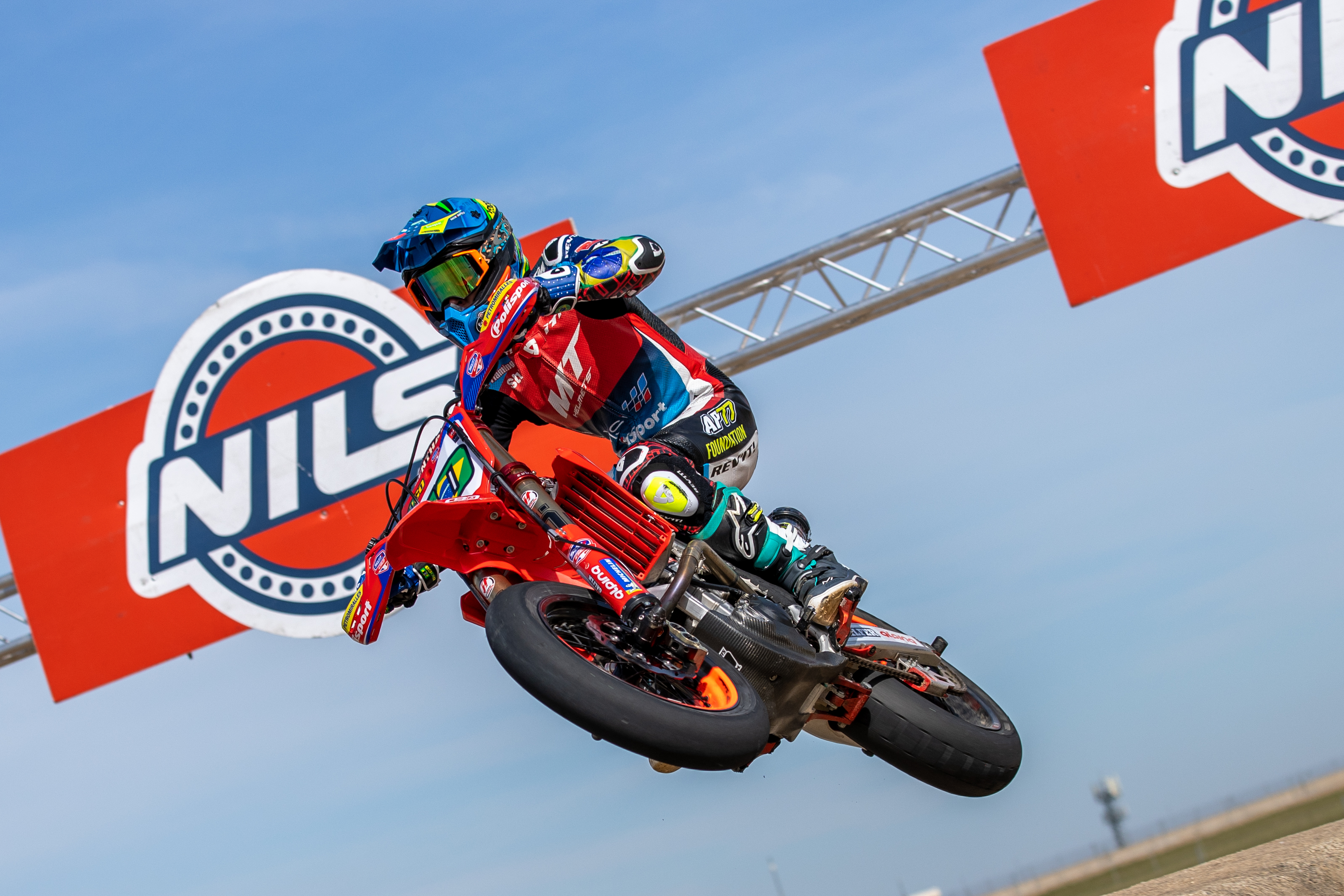 Alcarras (Spain), 7 May 2022 – The second Grand Prix of the 2022 FIM Supermoto World Championship is held this weekend on the Circuit of Alcarras, near Lleida in Spain. The challenging and fast track in the region of Catalunya has hosted events in the past and is a combination of high speed straights, technical corners, an sky-section and a great off-road section. Today the practises, Superpole and RaceOne were held in Alcarras in sunny and warm weather conditions. After an amazing race it was SGR Grau Racing Moto3 rider Diogo Moreira, who took not only pole position in the Superpole but also the victory in Race One of the S1GP class. With his victory, Diogo Moreira was also the fastest Rookie rider.

The time practice of the S1GP class started at 13:55 hours in Alcarras in the best weather conditions possible.  During the free practices earlier today SGR Grau and Moto3 rider Diogo Moreira and KTM MTR rider Lukas Hollbacher showed that they had a very good rhythm on the technical track. When the time practice started all riders didn’t waste any time and went on to the circuit immediately. With a full starting grid is was very important to set a good time in the beginning of the session. Lukas Hollbacher set the fastest time early in the time practice and the Austrian went into the pitlane to see what the competition did. Diogo Moreira and Spanish wildcard riders Jaume Gaya and Ferran Cardus where in the track setting faster times lap after lap but the time of Hollbacher was still to fast for them. L30 Racing TM Factory rider and leader in the World championship Marc-Reiner Schmidt was fifth overall, followed by SMX ASD rider Thomas Chareyre. It looked like Hollbacher was staying first but in the last lap on the session, Diogo Moreira set the ultimate lap and took over the first position.

The Superpole for the S1GP class started directly after the time practice. First rider on track was Thomas Chareyre who had to set reference time for the other riders. Second on track was Marc-Reiner Schmidt. The German rider took over the first position of Chareyre but had to wait what his time would be worth. Next on track was Jaume Gaya. The young Spanish rider who almost lives on the Alcarras race track did an very fast lap and took over first place from Schmidt. Than it was time for SGR Grau Racing rider Ferran Cardus. Cardus was very fast but a small mistake made him settle for sixth place at the starting grid for RaceOne. After Cardus it was time for Lukas Hollbacher to go on track. Hollbacher was fast but it was not the ultimate lap he needed. The Austrian KTM rider finished behind Schmidt in position three at that moment. Last rider on the track of Alcarras was Diogo Moreira. The Moto3 rider did an almost perfect lap of 1.27.063, which was 00.185 seconds faster than Jaume Gaya.

RaceOne of the S1GP class started at 16:30 hours in the afternoon in still very warm weather conditions. At the start it was SGR Grau Racing wildcard rider Diogo Moreira who took the hole shot into the first tight corner of the racetrack in Alcarras. Moreira was followed by Spanish KTM rider Jauma Gaya. Third position was for SGR Grau Racing rider Ferran Cardus who was in his turn followed by KTM MTR rider Lukas Hollbacher and SMX ASD rider Thomas Chareyre. L30 Racing TM Factory rider Marc-Reiner Schmidt had a bad last lap and was in seventeenth position. For the number three of the championship Tuning Motorsport rider Milan Sitniansky the race started with a crash in the first corner together with KTM MTR rider Andy Buschberger who broke his collarbone in the crash. For Buschberger the race was over, while Sitniansky had to restart from last place. In front Diogo Moreira already extended his lead towards to the other competitors and soon the young Moto3 rider was controlling the race. Behind Moreira, the battle for second position was fully open. In lap four Lukas Hollbacher took over third place in the race from Ferran Cardus. The Austrian KTM rider kept pushing and two laps later, second place was for him after passing Jaume Gaya. As soon as Hollbacher passed Gaya, it was clear to Ferran Cardus that he had to pass his fellow countryman as well otherwise the gap towards the top would be too big especially with Thomas Chareyre pushing from behind. Marc-Reiner Schmidt in the meantime was already in sixth position but that was all that the leader of the championship could do. Thomas Chareyre also passed Gaya and was now in fourth position but the competition was too far out to get more points in this race. Diogo Moreira finished the race in first position after twelve laps followed on 11.681 seconds by Lukas Hollbacher. The top three was completed by Ferran Cardus.

The FIM Supermoto Worldchampionship will be broadcasted delayed, by clicking HERE [https://www.supermotos1gp.com/tv-coverage/] you will obtain the full tv list