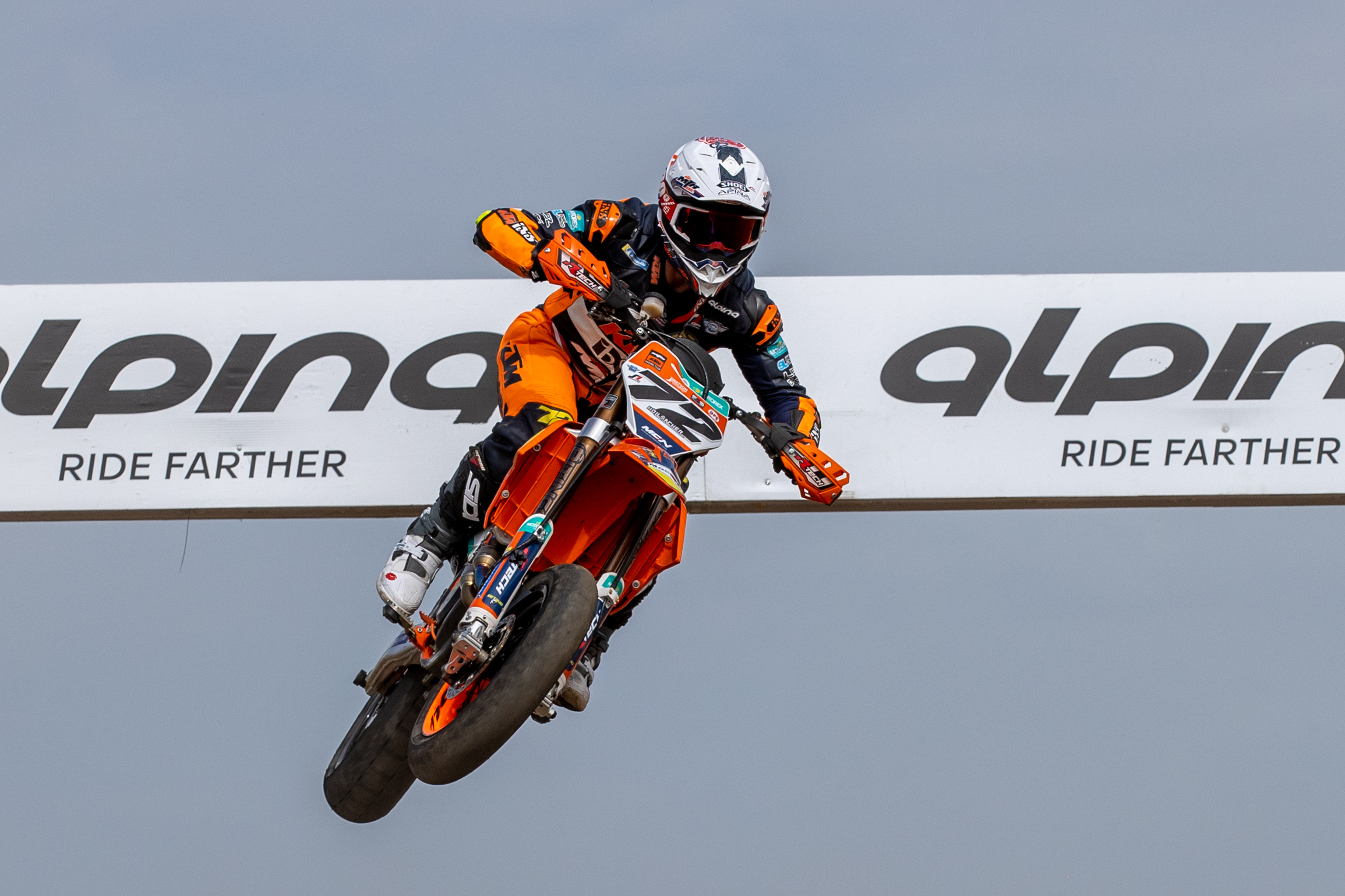 Tramatza (Italy), 4 June 2022 – The third round of the 2022 FIM Supermoto World Championship is held this weekend on the Sardinia Circuit WS98 – Pista di Tramatza, in Tramatza (Oristano) which is situated on near the westcoast of the wonderful island of Sardinia. In very warm and humid weather conditions, today the free and time practices, Superpole and RaceOne were held. After some very close racing it was KTM MTR rider Lukas Hollbacher who the victory in RaceOne. The weekend will continue tomorrow the FastRace and the Superfinal.

The time practice of the S1GP class started at 14:30 hours in Tramatza in very hot weather conditions, with temperatures rising up to 41 degrees Celsius. The conditions made it extra hard for the riders and their bikes, but as soon as time was started all riders went on track to set their fastest early in the session. During the free practices in the morning KTM MTR rider Lukas Hollbacher and SMX ASD rider Thomas Chareyre already showed they felt at home on the fast technical track in Sardinia. After 25 minutes of timed practices and with laptimes getting faster and faster, it was Thomas Chareyre who set the fastest time of 1:09:239, 00:049 seconds in front of L30 Racing TM Factory rider Marc-Reiner Schmidt and Lukas Hollbacher.

The Superpole for the S1GP class started directly after the time practice. First rider on track was L30 Racing TM Factory rider Elia Sammartin. Sammartin managed to set a good banker lap for the of the riders in Superpole. Second rider was Gazza Racing rider Nicolas Cousin who is back in the World championship this weekend. Cousin took over the first position in the Superpole in front of Sammartin. Third rider to enter the track was TC4R1 rider Steve Bonnal who surprised everyone. Bonnal’s lap was very fast until he made an mistake in the off-road section and crashed, but nevertheless a very good result for the young French rider. Fourth rider to go was Lukas Hollbacher and the Austrian baker was determined to take over the first position and he did with a lap of 1:08:994. Hollbacher couldn’t relax as still two riders had to set their lap. First one was Marc-Reiner Schmidt. The current leader in the championship gave everything he could, but it wasn’t enough to beat Hollbacher. Last rider on the track was Thomas Chareyre. With more motivation than ever, the multiple champion started his lap. Without any mistake Chareyre took the pole position with a time of 1:08:849. After the Superpole, Thomas Chareyre received a check of five hundred euro for taking the Superpole.

RaceOne of the S1GP class started at 17:00 hours in the afternoon in still very hot and humid weather conditions. At the start it was SMX ASD rider Thomas Chareyre who took the hole shot into the first fast chicane of the race track in Tramatza. Second position was for L30 Racing TM Factory rider Marc-Reiner Schmidt, followed by KTM MTR rider Lukas Hollbacher. Fourth place was for Gazza Racing rider Nicolas Cousin who was in front of L30 Racing TM Factory rider Elia Sammartin and Tuning Motorsport rider Milan Sitniansky. Already soon in the race the top three of the World championship was pulling away from the rest of the field leaving the other riders no chance for a top classification. In front Chareyre was still in the lead but Schmidt and Hollbacher were only a few meters away. In lap four Chareyre made a very little mistake in one of the tight corners but it was enough for Schmidt and Hollbacher to pass the French multiple champion. Marc-Reiner Schmidt tried to pull away from his opponents but Hollbacher had other plans in RaceOne. In lap eight he took over the first position in the race after passing Schmidt in the off-road of the Sardinia Circuit. Chareyre was still in third waiting for his chance to move up. With Hollbacher in the lead, the speed went up and the gap towards the rest of the field got bigger and bigger. Nicolas Cousin was in fourth until he crashed in the exit of the offroad section giving Sammartin, Sitniansky and TC4R1 rider Steve Bonnal the chance to pass him. In front the battle was still on between the Hollbacher, Smidt and Chareyre. Schmidt tried to pass Hollbacher in almost every corner but backmarkers made it difficult. One pass from Schmidt was immediately countered by Hollbacher again. After 18 hot laps it was Lukas Hollbacher who the win in RaceOne in front of Marc-Reiner Schmidt. Thomas Chareyre completed the three.

In the photo: S1GP Race One winner Lukas Hollbacher (Alpina)