SCHMIDT TAKES THE VICTORY IN THE S1GP OF CZECH REPUBLIC 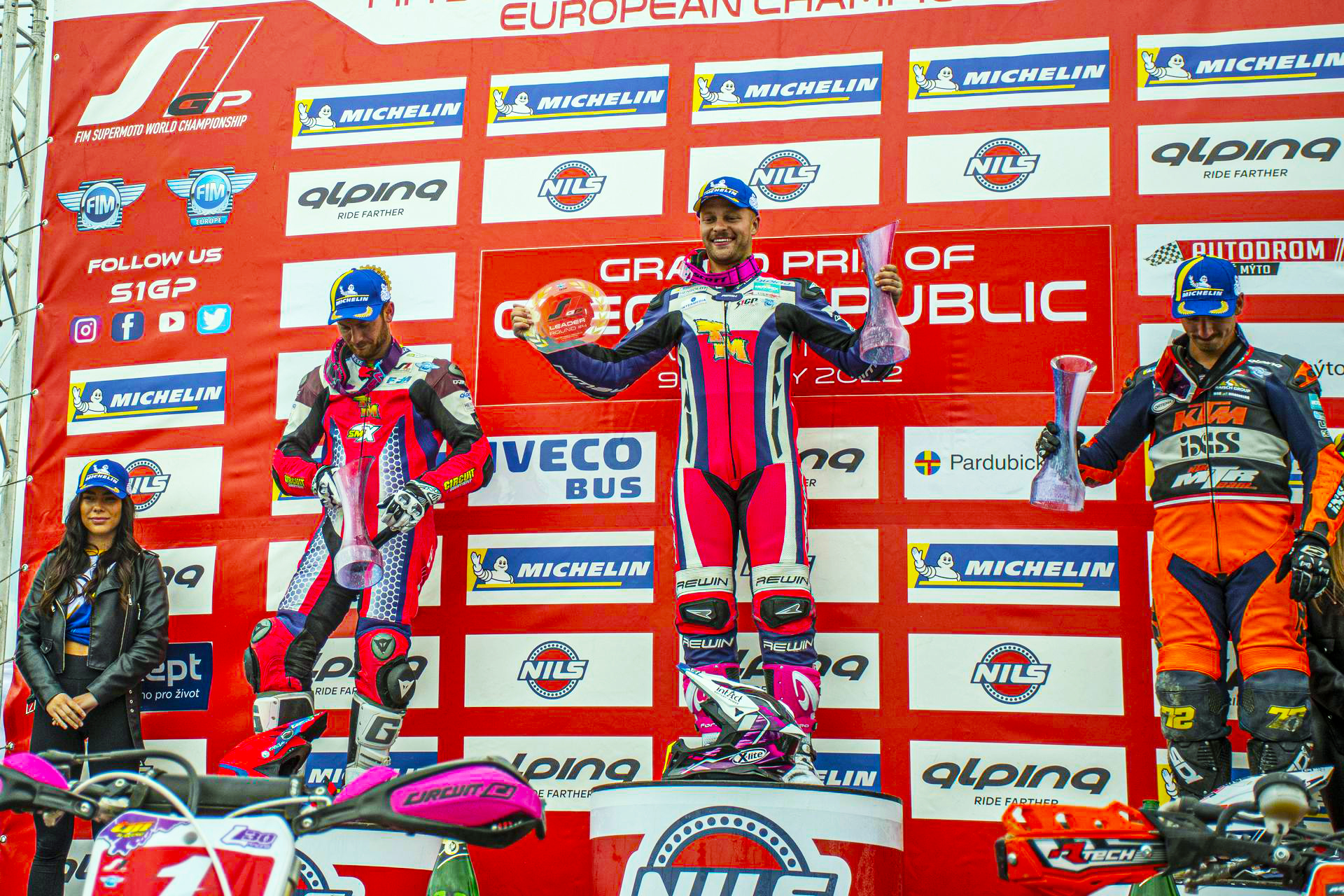 KTM KTR Lukas Hollbacher had an excellent start taking the holeshot and gaining two positions. But he could only hold the lead for one lap, then he was overtaken by L30 Racing TM Factory Marc Reiner Schmidt Tuning Milan Sitnianský lose his starting position (losing two positions actually) after being closed on the inside to Gazza Racing Youry Catherine and Tim Szalai, Slazai  unfortunately had a crash in Lap 2 dropping to last-but-one position, and then climbing again to sixteen eventually.

Sitnianský  then retook his position from Catherine in the second lap, and started to chase L30 Racing TM Factory Elia Sammartin. In Lap 8 Sitnianský attacked Sammartin  in the hill climb, after closing up the gap in the last corners leading to the hill straight. Sammartin managed to keep his position, though this attack really was a close call. For the rest of the race Sammartin and Sitnianský could not get away from each other.

In the meanwhile, leader Marc Reiner Schmidt was keeping a constant pace just as Lukas Hollbacher, both pulling away significantly from Thomas Chareyre, who could not accept the pace. Hollbacher pushed hard in the last lap to get close to Schmidt on TM, attacking him on the entrance of the first offroad section eventually. Nevertheless, Marc Reiner Schmidt managed to keep the lead until the checquered flag, seizing the victory for L30 Racing TM Factory. Lukas Hollbacher brings second position to the tent of KTM KTR with a small gap which opened up after unsuccessful attach. Thomas Chareyre finished in third with a gap of almost 10 seconds to Schmidt and Hollbacher.

Lukas Hollbacher on his KTM did have the best start, coming out in first place off the first corner, closely followed by Marc Reiner Schmidt and Thomas Chareyre , Milan Sitnianský , Elia Sammartin  and Youry Catherine, who was the best positioned Rookie after start.

In Lap 4, Lukas Hollbacher has been attacked by Marc Reiner Schmidt  when entering first offroad section. As Schmidt had to follow a wider line, the doors were open for Thomas Chareyre, and Thomas did not dare to slip through to second position. Milan Sitnianský in fourth felt the chance to attack also, but did not really have the pace to overtake Schmidt, but rather started to lose contact with leading triplet.

Hollbacher was putting Chareyre under heavy pressure for five consecutive laps. Chareyre did a small mistake eventually in one of the corners, and Hollbacher passed Chareyre to second position. Sitnianský on Honda was hanging on fourth, but actually not in attacking distance to be able to endanger any of the riders ahead.

In Lap 11, Hollbacher positioned himself in a striking distance on the entrance of the first offroad section again. It came to a collision which forced Hollbacher and Schmidt off the track, to the benefit of Thomas Chareyre, who was able to pass them both comfortably. Lukas Hollbacher suffered more from the incident, when losing his position also to Milan Sitnianský, whareas Marc Reiner Schmidt was back on track just slightly behind Thomas Chareyre.

During last four laps, Lukas Hollbacher was trying to get closer to Milan Sitnianský  in order to pass him, but could not succeed despite all the hard work. Their positions stayed the same even after Joker Lane, which they both went through three laps before finish.

In the meanwhile, Marc Reiner Schmidt in second and Thomas Chareyre in first were slowly pulling away from the rest of the field, to claim eventually at the finish line.

Despite a lot of effort by Lukas Hollbacher, he could not manage to pass Milan Sitnianský to reach the third position. So at the finish line, winner was SMX Thomas Chareyre followed by Marc Reiner Schmidt and  third Milan Sitnianský.