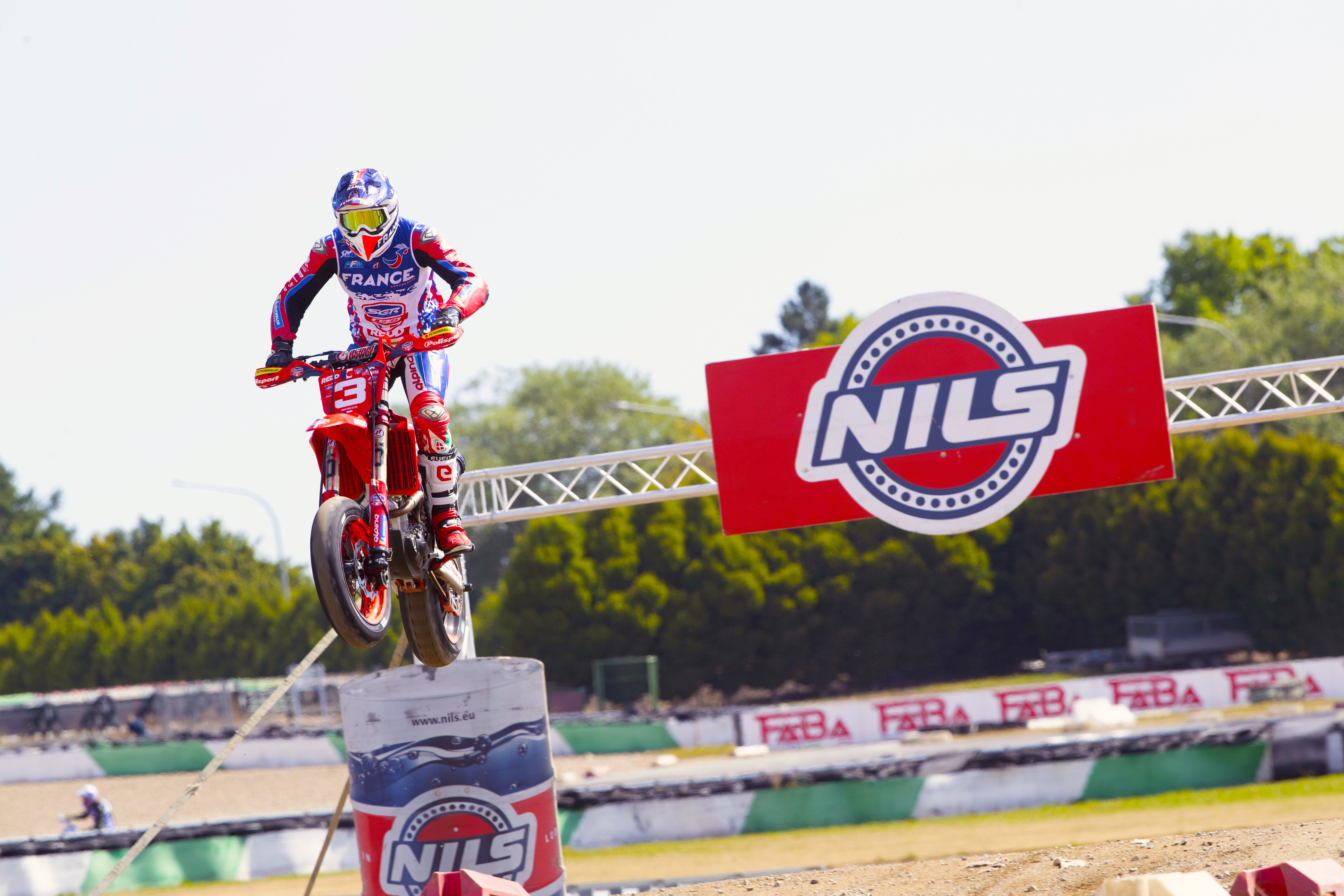 The first qualification race of the day saw multiple world champion Thomas Chareyre immediately stamp his superiority over the competition. After taking pole position in his group, he led from the line and continued to increase the gap throughout the heat. In the pursuit pack the fight developed for the other positions, with the Belgian Romain Kaivers quickly dominating for second. At the halfway point, the Italian Filippetti fell with a huge loss of time, meanwhile a nip and tuck battle was raging between Axel Marie-Luce and Raoul Tschupp keeping the crowds engaged, Tschupp riding for Team Switzerland finally took the last podium slot. In the lower orders Peter Mayerbuchler, Loucas Capone, Patrick Pals and Hampus Gustafsson fought for the sixth place.

Team Spain’s Julen Avila made a blistering start off the line: from the third row, he catapulted into the lead. Unfortunately, the Italian Diego Monticelli passed him on the first lap while Belgian rider Kevin Viellevoye scythed through the field moving up from sixth to third. On the fourth lap, Frenchman Nicolas Cousin set his best time and took the lead. The positions were fixed for the podium with Nicolas Cousin (FRA), Diego Monticelli (ITA) and Kevin Viellevoye (BEL). Team France Junior rider Youri Catherine was at the foot of the podium at the 4th place. The fight for the lower orders was again heated, Gotzl (SUI), Duncan (GBR), Avila (ESP), Madisson (EST) and Joannidis (GER) who respectively finish at positions 5, 6, 7, 8 and 9.

The last qualification of the day was dominated by Team Germany’s Marc-Reiner Schmidt dominating from the lights and was never worried during the entire heat. As Schmidt rode off into the distance to take his podium the crowds attention was again focused on the intense battle for places in the second half of the top 10. On the seventh lap, Frenchman Sylvain Bidart, third, came back on the Italian rider Elia Sammartin, second with barely a cigarette paper between then on the final straight he tried to make a pass but the Italian held for third with bitter determination.

Just like their elders, the young Frenchmen (Axel Marie-Luce, Youry Catherine and Steve Bonnal) took first place. On the other hand, the young Belgians (Romeo Fiorentino, Loucas Capone and Nicolas Vandommele) bettered their Seniors and proudly climbed to the second step of the podium this Saturday evening. They will have to watch out for the Spanish juniors (Jaume Gaya, Julen Avila and Alejandro Rodriguez) on the third place who dream to dethrone them.

The complete results are available here.

The weather conditions today were excellent: warm and dry.