FRANCE TROUNCES COMPETITION TO WIN THE S1oN FOR THE ELEVENTH TIME 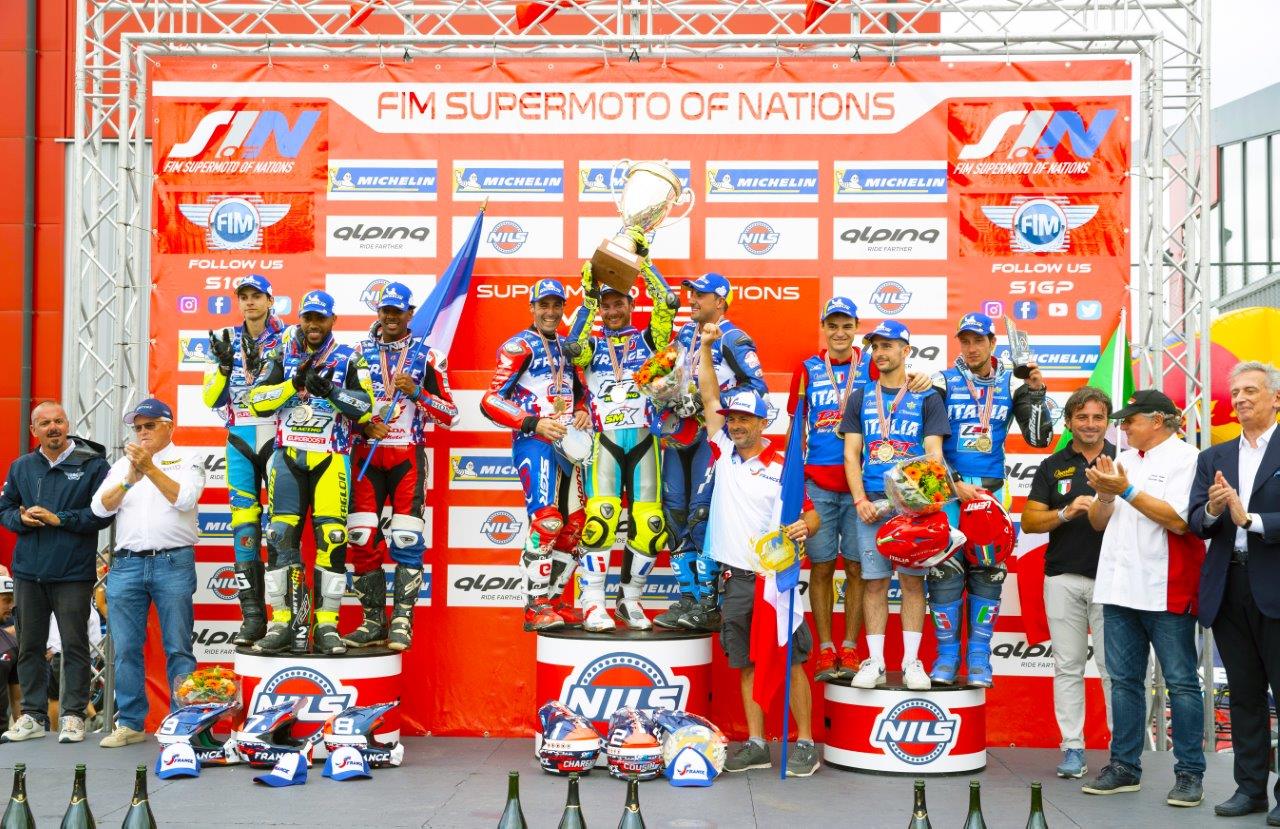 Mettet (Belgium), 31 July 2022 – Following on from Saturday’s qualifiers, the French team showed their insolent domination in the races on Sunday, leaving little hope for the other twelve participating nations. Whether in juniors or seniors, the French imposed their talent. Team France won the title for the 11th time in their history.

Once again, the Belgian weather showed its versatility. While Saturday had offered permanent sunshine, Sunday started under cloudy skies and a low temperature of 20°, but this did not detract from the motivation of the riders.

The first of the day’s three races started with riders 1 and 2 from each team competing for the FIM SuperMoto of Nations title. France took a strategic decision to apply the rule allowing them to choose the position of each rider on the grid. Splitting their team, Nicolas Cousin was placed on the front row and Thomas Chareyre in the middle of the pack. This proved to be a masterful use of tactics, gifting the French team the lead within the first lap as the multiple world champion Thomas Chareyre took second place within a few hundred meters and first before the end of the lap. While the first place of Chareyre was never contested, the duel for second place between Youry Catherine, part of the French Junior Team, and Belgian Romain Kaivers would last the whole race and end with the young Frenchman taking second. Third place ultimately went to the Nicolas Cousin of France, trumping the first Belgian rider, Romain Kaivers who had started off in fifth, in the last lap, Chareyre’s masterful display meant he crossed the finish line 10 seconds ahead of his nearest rival sealing a solid 1, 2, 3 for his country.

Lift off for the second race was in front of a mounting audience of enthusiastic fans gathered at the Circuit Jules Tacheny in Mettet. Team Germany imitated the tactics adopted by Team France in the first race and chose to place Marc-Reiner Schmidt on the 8th row. Here too the decision was a winner. Within 2 laps he was in first and from then on, he defended his leadership alone until the end of the race. Schmidt’s capabiltiiy and technique shone through maintaining a hellish rhythm to win the race carrying a 9 second advantage  over the excellent Diego Monticelli of Team Italy in second. The latter started fifth and rode hard making a great comeback to take second. Sylvain Bidart from Team France had defended second place for a long time but lost it to the charging Monticelli with 2 laps to go. Notably the Italian Elia Sammartin followed his compatriot Monticelli’s example and moved up from tenth to sixth place. The best Belgian rider, Romeo Fiorentino of the Junior Team, finished in seventh place. Just like Thomas Chareyre in the first race, Marc-Reiner Schmidt didn’t give any chance to his fellow riders from the beginning to the end.

The start of the 3rd and final race of the day was without incident and hotly anticipated to be fight between Marc-Reiner Schmidt and Thomas Chareyre, both riders having demonstrated they were at the top of their game in heats 1 and 2. Schmidt, having started 21st, finished the first lap in an astounding third position, behind first place Thomas Chareyre and the Italian Gioele Filippetti. To the surprise of the public, Thomas Chareyre played the tactical card letting to Schmidt take first place. This meant he could apply maximum pressure, while still securing his team the overall victory. Lower down in the order the Belgian riders, Romeo Fiorentino and Loucas Capone were 14th and 15th. After a further 3 laps, Romeo was up to 12th while Loucas had dropped to 16th. Maintaining his consistent streak Romain Kaivers successfully defended fifth place throughout the race barring a hiccup on the 8th lap. Meanwhile at the front, the competition between the two leaders was fierce with only a second difference at the finish – Chareyre literally haunted Schmidt like a ghost the entire race applying immense pressure on the German who resisted valiantly. Throughout the race Romain Kaivers, Sylvain Bidart and Elia Sammartin gave the crowds a great battle.  On the 9th lap, Sammartin was resisiting a strong challenge from Kaivers while Romeo Fiorentino moved up to 9th and Capoue to 13th. By lap 10, Fiorentino was in 8th stealing another place to take 7th at the end. Despite the best efforts by Schmidt, it was France who stood victorious lifting the FIM SuperMoto of Nations trophy in the air for the eleventh time.

As in the senior event, the French junior team of Axel Marie-Luce, Youry Catherine and Steve Bonnal, gave their opponents no quarter and dominated the field of battle.

The Spaniards Jaume Gaya, Julen Avila and Alejandro Rodriguez took second overall and  Julen’s audacious display of talent won roars of enthusiasm from spectators as he put his knee to the ground at implausible speed. The Belgian trio of Loucas Capone, Romeo Fiorentino and Nicolas Vandommele conquered the hearts of the crowd as they climbed to take the 3rd step on the podium.

In the photo: Team France podium @ credit by Davide Messora