AN EXTRAORDINARY THOMAS CHAREYRE WINS THE FIRST RACE IN CAROLE 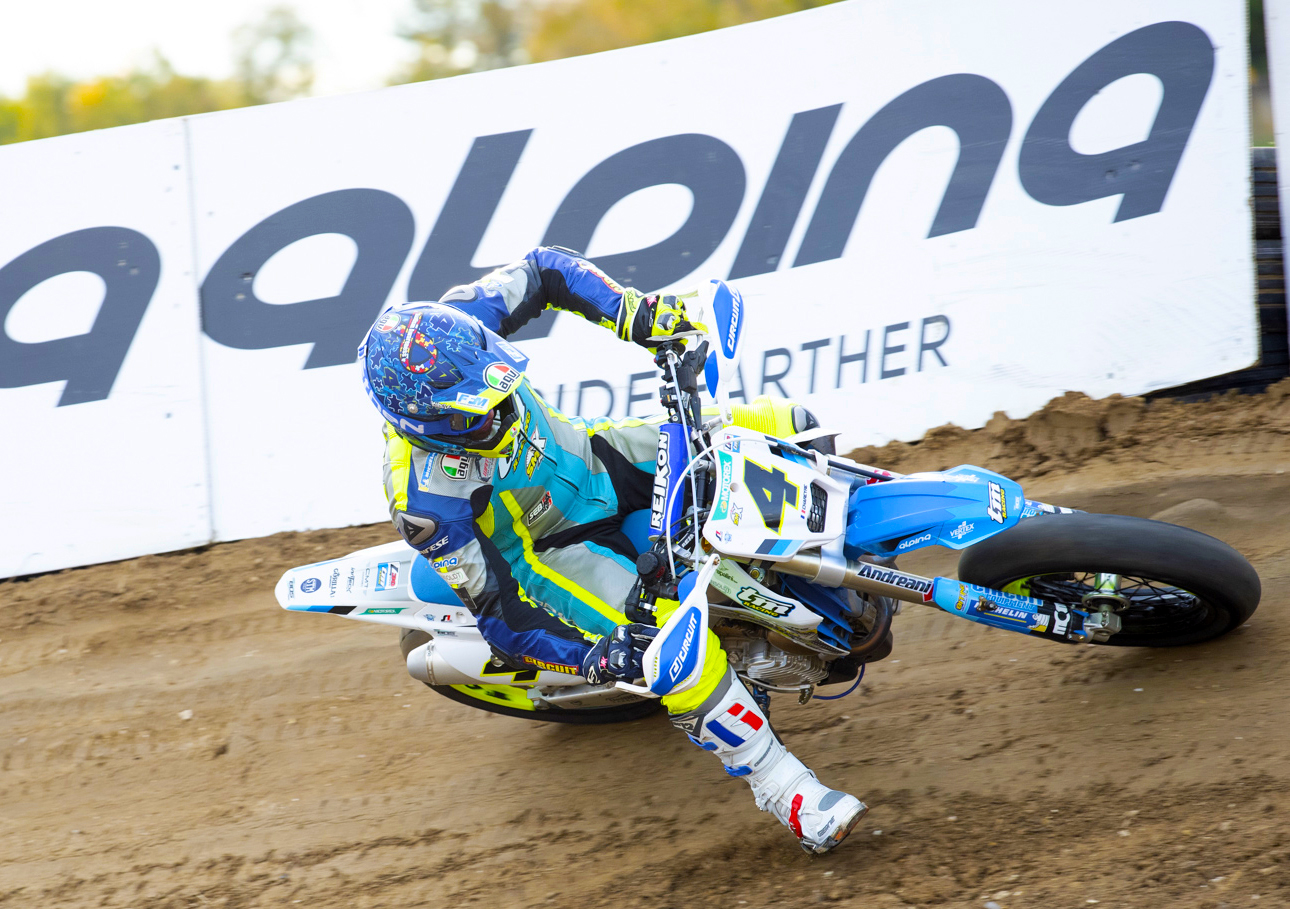 Carole (France), 15 October 2022 – Heavy rain featured the days preceding the race and made the off-road section of the track of Carole almost impassable. Thanks to the great work done by the technical staff of the circuit, the off-road section was reopened for the time practice and the first race. The entertainment was secured by Thomas Chareyre’s extraordinary victory and by Youry Catherine in the Rookie.

Track conditions were wet for the first part of the time practice so riders had to choose the right type of tyres, the most suitable to set the fastest time. During the 25 minutes available, several riders followed one another in the top positions of the standings. Marc Reiner Schmidt (L30 Racing) set the fastest time only in the final laps and finished in front of Lukas Hollbacher (MTR KTM). The two of them were followed by the very young riders of the Rookie class, Steve Bonnal (TC4R1 Racing) and Axel Marie Luce (TC4R1 Racing), current Championship leader of his category. Milan Sitniansky (Tuning Motorsport) and Germain Vincenot (Honda) were among the top six riders. Thomas Chareyre (SMX) was excluded by the Superpole, due to a wrong direction received from his box and set the eighth time. Elia Sammartin, fourth in the World Championship standings, ended up with the 11th place due to the wrong choice of mounting the rear rain tyre.

The German rider Marc Reiner Schmidt and Lukas Hollbacher battled it out for the Superpole. The rider managed by Ivan Lazzarini staged a perfect lap and set an unbelievable time which secured him the pole position. Lukas Hollbacher tried his best but made a few small mistakes which granted his main rival six tenths of a second. The third place went to Milan Sitniansky, from Czech Republic.

Milan Sitniansky (Tuning Motorsport) took the lead at the start of the first race of the weekend, but the Czech rider was handed a 20-second start penalty. Marc Reiner Schmidt (L30 Racing) overcame all the riders in the second lap while Thomas Chareyre (SMX) was the protagonist of a phenomenal recovery from the back of the pack. After a few laps, the multi World Champion overcame his rivals easily and chased Schmidt. With record times, Chareyre took the lead of the race at the eighth lap and thanks to a good rhythm crossed the finish line with a solid gap.

Thanks to this victory Thomas Chareyre is now back in second place in the standings and reduced the gap from leader Marc Reiner Schmidt to just eleven points.

In the Rookie class Youry Catherine was impressive in finding the perfect opening at the first corner and after a moto without mistakes he came home with the victory in the category reserved to the youngest riders. Thanks to this result Youry is the current Championship leader.

The FIM Supermoto World Championship will be broadcasted delayed, by clicking HERE you will obtain the full tv list